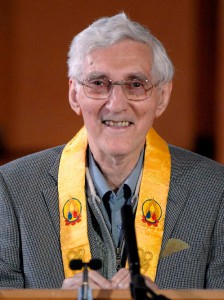 The Triratna Buddhist Community (formerly known as the Friends of the Western Buddhist Order) was founded in 1967 by Sangharakshita (Dennis Lingwood) (26th August 1925 – 30th October 2018), an Englishman who spent twenty years in the east, sixteen of them as a Buddhist monk. Returning to Britain in the mid-1960s he saw the need for a new Buddhist movement. His vision was to create something faithful to traditional Buddhist values while being relevant to the modern world.

Rather than adopting one specific form, Sangharakshita was keen to clarify what all Buddhist schools held in common: the essential principles and practices that run through the whole tradition. He suggested that the key, unifying factor is the historical Buddha and his experience of Enlightenment.

The approach that Sangharakshita emphasised is based on the perception that the diverse Buddhist tradition has an underlying unity. This lies in the act of going for Refuge to the Three Jewels, and in basic teachings of the Buddha, such as the four noble truths, dependent arising, karma and so on. Sangharakshita believed people in the modern world are heirs to the whole of Buddhism. This is why the Triratna Buddhist Community does not restrict itself to one form of Buddhism but draws inspiration from the entire tradition.

This attitude is not simply eclectic, however. Sangharakshita taught a coherent approach to practice, which draws on particular techniques and teachings in a way that supports individual growth. Sangharakshita emphasised that going for Refuge to the Three Jewels is primary in any Buddhist life. How one expresses that in one’s individual life may vary enormously. As he put it — “Commitment is primary; lifestyle is secondary”.

Sangharakshita maintained that in practising Buddhism we need other people to learn from. Buddhism, he argued, is “best caught not taught”. He believed that our relationships with teachers and fellow practitioners must be characterised by honesty and open communication. He also stressed the value of friendships with peers, in particular having at least one platonic friend with whom we can be intimate and completely frank. Through friendship we have the opportunity to develop the virtues of generosity, compassion, patience and forgiveness. Sangharakshita’s vision of spiritual community — particularly of the Order he himself founded — is of a ‘network of friendships’.