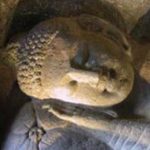 In today’s modern world, the subject of death is often considered taboo and morbid. But in Buddhism, reflecting on death is seen as an essential way to help us to live life more fully, freely and joyfully. Parinirvana Day is an important Buddhist festival when we reflect on the Buddha’s death and his passing into Parinirvana. It is also a time for reflecting on the impermanence of all beings, and to consider our own attitudes towards death. Do we tend towards a nihilistic view, that after death that’s it, nothing else, no more struggle, just complete oblivion? Or do we have an eternalistic view, that after death we float off to ‘heaven’ and meet up with our loved ones? Is there an alternative view? Is there such a possibility as rebirth? Whatever our particular view, we all have fears and questions about death. These fears and questions are what prompted the Buddha to start out on his great spiritual journey.

2,500 years ago Siddhartha Gautama experienced the Four Sights: he went out from his sheltered existence in the palace and first of all encountered an old person, then a sick person and then a corpse being carried to the cremation ground. Many years later, he experienced all of those things directly for himself – old age, sickness and death. However, he had also seen the fourth sight, that of a wandering monk, a seeker after truth. His response to this sight was to take up a similar life himself and to devote himself to a path of spiritual discovery, which led to his Enlightenment under the Bodhi tree. So when old age, sickness and death came upon him he was able to experience them from a position of full awareness and compassion, a position of equanimity and understanding. He met his death without fear. 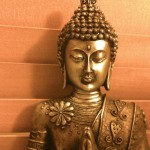 Celebrated on the first full moon in May

“Do Buddhists celebrate Christmas?” Considering Christmas is a Christian festival the celebration of the birth of Jesus Christ, this question can sound a bit odd. But perhaps what it is getting at is: what is the Buddhist ‘equivalent’ of Christmas?

Just because Buddhist people around the world do not put up plastic trees and buy loads of things once a year does not mean they do not celebrate! In fact, Buddhists have lots of reasons to celebrate. Since human enlightenment is considered by Buddhists to be the greatest possible reason for celebration and something to be rejoiced in with every fibre of your being, Buddhists around the world mark quite a few special days with festivities.

Buddha Day is the largest and most important of these festivals. We celebrate the day the Buddha gained enlightenment under the Bodhi tree with meditation, pujas, readings, mantras, and talks. 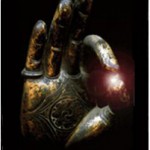 Celebrated on the first full moon in July

Dharma Day is a festival when Buddhists from all traditions celebrate their good fortune in coming across the Dharma.

2,500 years ago, the Buddha Sakyamuni first turned the Wheel of the Dharma. Then, in our own time, Sangharakshita brought the Dharma to the West. We remember Sangharakshita’s eight teachers, with whom he studied the Dharma in India: you can read about each one in his book Precious Teachers.

On this day we may reflect what our lives would be like without the Buddha’s teachings. When did we first come across the Dharma? Was it through meditation, or through a desire to question and explore philosophical questions, or through an experience of doubt, or faith? We come together to reflect on these questions and rejoice in the Buddha’s teachings, and those of his followers throughout the ages.

Sometimes called the Second Buddha, Padmasambhava is both a historical and a mythic figure of Tibetan Buddhism.  Although certain Buddhist scriptures arrived in southern Tibet from India as early as 173 CE, they did not make a great impression until the arrival of the great tantric mystic Padmasambhava in Tibet six hundred years later. It was Padmasambhava (more commonly known in the region as Guru Rinpoche) who merged tantric Buddhism with the local religion to form what we now recognise as Tibetan Buddhism.

On Padmasambhava Day, we rejoice in the transformative energy of this great teacher. Sitting in a posture of royal ease and wearing a wrathful grin, he subdues our demons with his right hand and holds a skull cup of amrit nectar in his left. His staff, or khatvanga, reminds us of the power of transformation, and the vulture feather in his cap symbolises the bird who flies the highest. 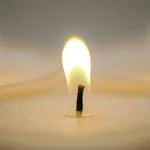 Celebrated on the first full moon in November

The Buddha exhorted us to meet in large numbers to practise and that’s what we do on Sangha Day.

When Ananda asked the Buddha if friendship is half of the spiritual life, the Buddha replied, “Say not so, Ananda. Say not so. Admirable friendship, admirable companionship, admirable camaraderie is actually the whole of the spiritual life. When one has admirable people as friends, companions, and comrades, one can be expected to develop and pursue the noble eightfold path.” (Upaddha Sutta)

In the Sigalovada Sutta, the Buddha gives us these characteristics for a warm-hearted friend: one who is a helpmate, one who is the same in happiness and sorrow, one who gives good counsel, and one who sympathises.

On this day, we can reflect on our own spiritual friendships and rejoice in them.